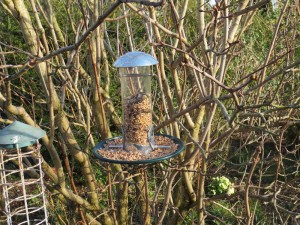 Wildlife Garden – Disaster strikes. My worries about the Kestrel have been confirmed – yesterday afternoon a Kestrel zoomed around the house, flew into the window and landed on the path. It flew off after a few seconds with a small bird in its claws. My only consolation is that it wasn’t our Great Tit lodger. So the new state of the art birdfeeder has been taken down and we have put up our ancient old one in a more open space, hoping that the Kestrel won’t be able to catch the birds by surprise.
Ornamental Garden – My helper and I were out in the garden yesterday weeding and moving  plants. I have been shamed into action by visiting some friend’s gardens which all look ready for  action. Not sure how they have done it as it is so wet and the beds are not really suitable to work  in. However, the flower beds are drying out quite well so it’s time for action! 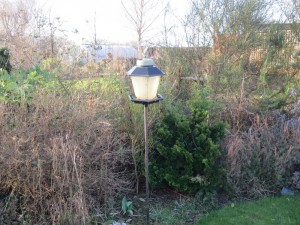 We are rearranging the four beds in the Yew Walk into a proper Rose Walk. We’ve planted some  new David Austin Roses – Winchester Cathedral (White), Darcy Bussell (Maroonish), Susan Williams-Ellis (White) and Mary Rose (Pink)to join our stalwarts Bonica (Pink), The Fairy (Salmon Pink) Cornelia (Pinky) and Little White Pet (White with Crimson buds). I am putting in some Primulas and Bellis Daisies to accompany the tulips already planted and will edge the beds with Lavender ‘Imperial Gem’. We have had Roses in these beds for a few years but I have let them be overwhelmed by perennials, so this year I am restricting the perennials and focusing on the Roses. Of course, this has nothing to do with the fact that Michael Marriot of David Austin Roses is coming to the Garden School next March!