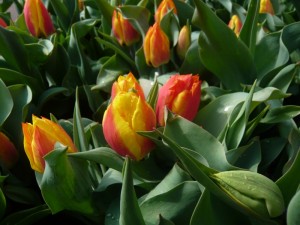 All of the family set off for Amsterdam last weekend, with the intention of going to the famous Keukenhof gardens outside Amsterdam. Sadly it was not to be because there were no tulips at the gardens. We decided not to go to Keukenhof, but stay and look around Amsterdam instead. The only tulips we saw were in containers in the city itself – see photo – and there weren’t many of those. Lots of daffodils though. We went to the Botanical Gardens which was very pleasant. It was disappointing for us, but this weather is playing havoc with everything. I noted in last years diary that the daffodils were out in mid March and most of the tulips were out too. My garden is also full of daffodils at the moment and the tulips are just starting to appear – a full month later than last year.

This is a vigorous yellow/orange annual climber. I grew some last year but they didn’t like the horrible summer and were quite poor I decided to give them another go this year, so I soaked them the night before last and sowed them at 7.00 p.m. last night and put them in the kitchen (they need warmth to start off). Imagine my surprise this morning when I picked the pot up and saw three shoots emerging from the compost. You can’t get much quicker than that!