Buddleja or Buddleia – the Butterfly Bush

Our garden buddlejas were named after an Essex botanist called Reverend Adam Buddle.

There are over 100 species ranging from 16 to 98ft tall. Buddlejas are not native to Europe; the ones we are familiar with in Britain are hybrids of Buddleia davidii which flower in July and Augustin Britain. They were named after a French missionary called Pere David who worked in China in the late C19. I particularly like these buddleias as they remind me of my father, whose name was David.

I have tried to extend the flowering season by introducing some other varieties into the garden. Here is a description of my Buddleia year:

May – June, Buddleja globosa – bright orange balls appear on quite a sprawling plant. The flowers provide some early food for butterflies.

June, Buddleja alternifolia – has silvery green fine leaves with pale lilac flowers. It is a very pretty shrub which can be trained to grow into a small tree.

July – August, Buddleja davidii varieties are in flower. I grow:

All Buddlejas like a warm, sunny position, preferably in well drained ground – you only have to look at railway embankments to see what they like! It is usual to cut the stems down to 1- 3ft in the Spring as this keeps the plants from becoming too ungainly and also helps flowering. I hardly prune Nanho White and am also quite sparing with Pink Delight and Lochinch.

Buddlejas are great butterfly plants, so to even the balance I have been out in the garden looking at plants which attract bees, boverflies and other insects. 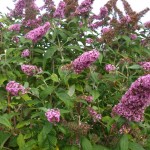 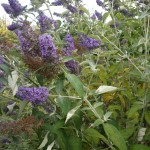 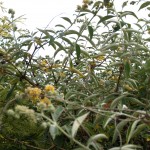