Autumn in the Garden

I actually really like this time of year in the garden, especially as the weather is mild this year. I could definitely do without these awful winds though.

The best flowers at the moment throughout the garden are on the half hardy plants, such as dahlias, salvias, argyranthemums, pelargoniums and cosmos which are in full bloom, following a really late start. The only problem is that they will all be cut down by the first frosts and will lose all their lovely flowers and foliage – what a pity!! I have taken some pelargonium cuttings which are now in my daughter’s bedroom, and should have taken cuttings from the salvias and argyranthemums.

These photos shows some of the flowers in the cutting garden which I think looks really nice now – shame it didn’t look like this in the middle of the summer. 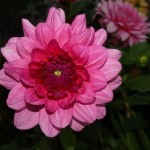 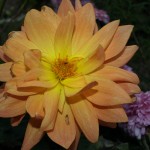 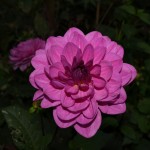 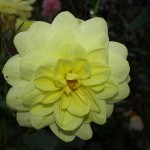 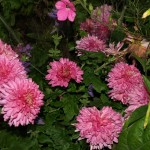 The dahlias are still looking good, but are being buffeted about like boats in a storm. I will leave them in the ground and then decide what to do after the first frosts have killed the foliage. I could either dig them up, put them upside down in a dry place to drain off and then keep them in slightly moist peat or compost for the winter, or I could take a risk and leave them in the soil with a mound of soil or compost over each tuber to protect the plant from frost. I think I will probably go with the first option but will have to wait for my gardener friend to come and help with the digging up!!

It is time to think about ordering Dahlias for next year. I now try to buy tubers rather than rooted cuttings as it takes a year or so for rooted cuttings to make good sized plants, and they also start flowering far later than tubers. My favourites are still Gerrie Hoek (pink) and Gloria van Straten (yellow) but I have enjoyed lots of others this year.

I will also try and overwinter Begonia ‘Dragon Wings’ which was recommended in one of Christopher Lloyd’s books. It has red flowers and I bought about 8 of them from my local nursery for about £3 each, so I am quite keen on seeing if I can get them through the winter and save the money next year! I will dig them up soon and put them in compost and keep them in the greenhouse, and hopefully they will spring into life again next year.