Brooms (Cytisus) have been flowering for some weeks now, the small pea like flowers emitting a sweet scent. The plants have green narrow whippy stems and are usually deciduous or semi- evergreen.

Our native broom is Cytisus scoparius which grows about 6ft tall and has bright yellow flowers in May and June. Another broom, Cytisus x praecox (Warminster Broom) is slightly smaller with arching creamy yellow flowers in April and May.  All brooms need a well drained light soil and a sunny position. They also like a sandy soil although some, like  ‘Killiney red’ are fine in clay soils.

One good thing is that Brooms like our garden at Fieldcrest. They self seed around the place, particularly in the sunny border at the back of the house. Unfortunately, I have to keep removing some of them as they block our outlook from the house. As they have quite a taproot, they do not like being moved, so I afraid that most of those I dig up die.

It has also been interesting noticing the colour changes in the self seeded brooms brooms. They started off like the variety ‘Burkwooodii’, with yellow-edged crimson and maroon flowers and have gone through a number of stages to return to the usual yellow broom colour. See the pictures below to note the progression. I think I actually prefer the dominant yellow coloured ones. Funnily enough they go beautifully with Tulip ‘Angelique’, which is a light  pink peony flowered tulip, probably because the tulip has some yellow in it’s centre.

I also have the white flowered broom C praecox Albus, which is a beautiful broom, but unfortunately this does not seem to produce viable seed.

We also have some dwarf brooms in the garden. I have got two of these which will grow to about 2ft high, and are labelled C kewensis, but once again they have bright yellow flowers and not the tasteful cream which is what I was hoping for.

I have nearly forgotten to mention the Moroccan Broom (C. Battandieri). This is a tall plant bearing cones of pineapple scented flowers in May and June. Our plant was here when we came and grows at the side of the house, in a very windy place. It is a pitiful specimen, very spindly and bearing hardly any flowers. Every year I intend cutting in down, but can’t quite bring myself to do it. I may do this year though if there’s no improvement!

Brooms can become quite straggly, so it is worth cutting the stems back by up to half after flowering, but not into the old brown coloured wood as the plant may not rejuvenate.

You can have a go at propagating brooms by semi ripe cuttings in August or September, hardwood cuttings for Cytisus x praecox in winter, or why not collect your own seeds by sowing them in Autumn and letting them stand outdoors to germinate in the spring? You might get some interesting colour variations. 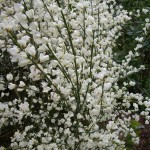 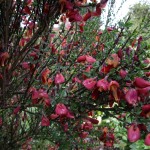 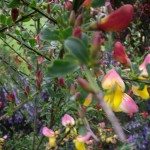 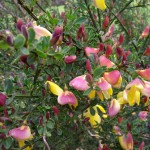 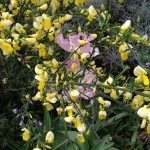